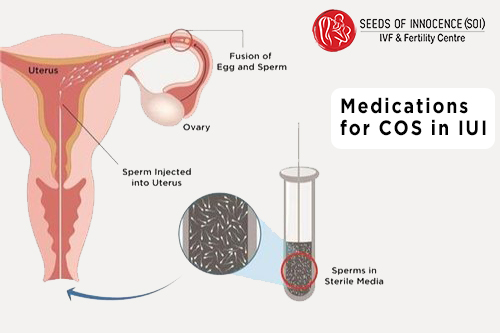 1. Controlled ovarian Stimulation is the cornerstone of ART treatment offered to couples having infertility problems.

Dosing: Usual dose is 50mg daily x 5 days. If ovulation occurs but is NOT followed by pregnancy, a repeat course for about six cycles can be given.

If ovulation does not occur: Dose ↑ 100mg daily x 5 days OR repeated twice if needed or add gonadotropins on Day 3/5/7.

The ovulation rates are ~60-85% and pregnancy rates ~10-20%, chances of having multiple pregnancies is ~10%. Despite good ovulation rates, the reduced pregnancy rates are primarily because of its anti-estrogenic effects at the endometrium, resulting in poor thickness, reduced glandular density, and changes in quantity & quality of cervical mucus. All this also accounts for miscarriage rates of ~20-25%. To reduce these effects, the dose should not exceed 150mg in clinical practice.

u Weight management in case of obese PCOS

2.  Aromatase Inhibitors (AIs)- Letrozole is the most common drug from this class. These act by inhibiting androgens to estrogen, which releases the hypothalamic-pituitary axis from estrogenic negative feedback and increases the gonadotropin release. AIs have short ½ life (~ 2 days) compared to CC (~2 wks), so estrogen target tissues like endometrium & cervix are spared from adverse effects. The suggested dose of Letrozole is 2.5 mg OD for five days starting from cycle day 2/3. Certain studies have also demonstrated the efficacy & success of a single dose of 20 mg on Day 3 of the menstrual cycle.

3. Gonadotropins- Unlike CC/AIs, gonadotropins act directly on the ovaries. For women with PCOS who do not respond to clomifene citrate, gonadotrophins have been used as ovulation induction agents (NICE Guideline 2004).

They represent a more physiologic approach to follicular recruitment than CC. Gonadotropin preparations constitute the principal agents for ovulation induction and COS & result in significantly higher odds of pregnancy per woman (OR =1.41, 95% CI 0.17 to 0.80).

The starting dose is based on age, BMI, the existence of PCOS & any previous history of OHSS or high response. No single protocol for Gn dosing has yet been approved. However, they should be begun with the lowest dose (37.5/75mg) and increased gradually over cycles to not beyond 150-225mg for Stimulation in IUI cycles. The ongoing pregnancy rates are higher when compared to CC (15% vs. 9%).

4. GnRH agonist- very limited role in IUI. It may be used in patients with endometriosis. However, gonadotropins alone are more effective than with the addition of GnRH agonists.

5. GnRH antagonist- they may reduce premature LH surge. But no improvement in pregnancy rates has been seen and results in a higher cost of treatment.

Hence, to conclude, the treatment decision hinges on whether the modestly increased chance of pregnancy with IUI in stimulated cycles justifies the cost of medication, the need for monitoring, and the patient discomfort together with the chance of complications such as multiple pregnancy and OHSS.