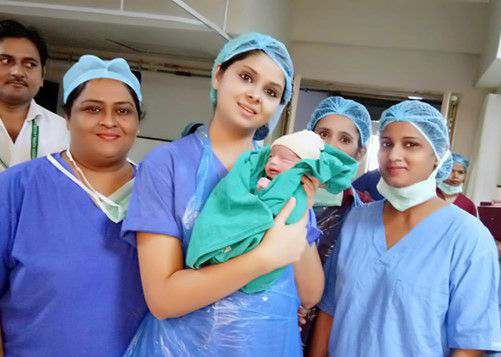 Thalassemia is an inherited disorder of blood resulting in abnormal production of hemoglobin. The protein substance in blood. Hemoglobin carries oxygen, large numbers of which is destroyed leading to anemia. Anemia may be mild to severe and the symptoms include tiredness and pale and yellow skin.

Blood sample is taken by the lab to diagnose the abnormal forms of red blood cells in the blood. Hemoglobin electrophoresis separates the different molecules in the RBC’s, to identify the abnormal type.

Testing of embryos obtained through In vitro fertilization through PGD may detect the possibility of mutated genes in the embryo of carrier parents.

Alpha Thalassemia : It usually occurs when the body cannot produce alpha globin. A total of four genes, two from each parent is required for the production of alpha globin. This type can be further sub classified into two as:

Beta Thalassemia : It occurs when the body cannot make beta globin due to the missing or mutated genes, responsible for the production of beta globin. It is also further sub classified in two types :

There’s no way to prevent thalassemia as it is a genetic disorder, However, there are some ways to manage the disease to help prevent complications.
Blood transfusions
Medications such as folic acid, iron and vitamins
Bone marrow transplant
Surgery for spleen or gall bladder removal

Frequent blood transfusions are combined with Chelation therapy where an injection of a chemical is given that binds with iron and other heavy metals to remove extra iron from the body.

Reduced number of red blood cells are not capable of carrying proper oxygen to the tissues and organs leading to dizziness, fatigue, weakness and shortness of breadth. Severe conditions may be fatal and lead to organ failure.

Thalassemia has some concerns related to pregnancy, resulting from poor development of reproductive organs to fertility issues. The iron levels should be monitored carefully and if pregnant prenatal testing through NIPT or Chorionic villi sampling for thalassemia is done at 11 and 16 weeks of gestation. Pregnant woman with thalassemia may develop following complications: –
Risk of frequent infections
Heart problems
Gestational diabetes
Increased blood transfusions
Hypothyroidism
Low bone density

The gene and genetics of Thalassemia

Thalassemia is a genetic disorder. Either one or both of the carrier parents have their children affected by Thalassemia minor or major. The only way to not to have children with thalassemia is genetic testing. The embryos are obtained through the procedure of IVF and cultured till blastocyst stage. One or more cells are taken out through biopsy and then preimplantation genetic diagnosis is done to rule out the possibility of genetic disease. The missed gene/genes or the mutated genes are diagnosed and only aneuploidy free embryos are transferred into the uterus. This technique ensures the birth of healthy baby. At Seeds of innocence we are committed not only to deliver babies but healthy babies by opting genetic testing in most of the IVF cases. Our genetic lab “Genestrings” is fully equipped with modern technologies to ensure the birth of healthy generations