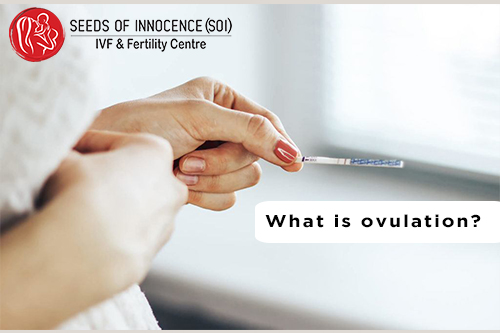 Ovulation is defined as the release of the ovum from a mature follicle. This released ovum is generally viable for 24  hours post-ovulation, and this is the window in which fertilization occurs.

WHY DO WE NEED TO USE OVULATION TEST KITS?

This will help a woman to predict the approximate window of ovulation and thereby, having intercourse in that time is going to increase the chances of pregnancy.

In today’s hectic lifestyle where couples are busy and cannot frequently undergo ultrasound scans, they wish to plan a pregnancy; ovulation kits have a good role. Ovulation Test kits assist a couple in becoming pregnant faster, safely, and naturally by guiding them about their fertile window.

HOW DO OVULATION TEST KITS WORK?

Leutinizing hormone is an essential fertility hormone. LH surge is a sudden rise in the luteinizing hormone, which facilitates the process of ovulation. LH surge occurs approximately 24to 36 hours before ovulation. LH hormone is excreted via urine. Therefore the concentration of LH hormone is high in urine during the time of ovulation. The ovulation kits are designed to detect the presence of LH hormone in urine and thereby predicting the fertile window. The menstrual cycle occurs as a result of complex hormonal interactions. These changes in hormone levels decide and control the fertile window. The menstrual cycle is controlled by the hormones released by the anterior pituitary gland.

(follicle-stimulating hormone and LH) and the hormones released by ovaries  (estrogen and progesterone).

Constantly Changing and fluctuating hormone levels of the above-mentioned hormones throughout the menstrual cycle control ovum development and ovulation.

The chance of conception is high on the day preceding ovulation and on the day of ovulation.

The duration of the fertile period is decided by both the viability of sperm in the days prior to ovulation and the lifespan of the ovum; it is generally believed that sperm can survive for up to 5 to 7 days in cervical mucus, whereas the ovum typically survives for 12–24 hours post ovulation.

WHEN TO START YOUR TESTING?

Each ovulation kit consists of 4 to 5 test strips.

First, calculate your cycle length. Your cycle length is the number of days starting from the first day of your menstrual cycle till the last day before your next periods begin.

Subtract 17  from your cycle length. So if your cycle is of 28 days, you should start using the kit from the 11th day of your cycle.

The first-morning sample is not used for testing.

Test to be done only once a day

Preferably test in the afternoon.

HOW TO READ AND INTERPRET THE TEST?

POSITIVE: If both C and T lines are present, it indicates impending ovulation in the next 24 to 36 hours, thereby pointing to the fertile window, the couples should have intercourse during that time.

NEGATIVE: If only the C line is present and Online is absent, it means testing should be continued the next day also.

INVALID: IF both the lines are negative, repeating testing to be done using a new kit.

WHAT TO DO IF YOU ARE STILL NOT GETTING PREGNANT DESPITE USING THE KIT?