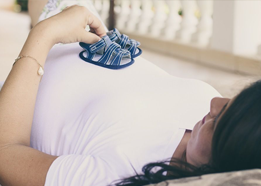 The red brown spot is not always a red alert signal when it comes to vaginal bleeding during early pregnancy. About 25% women experience vaginal bleeding in their first trimester and approximately half of pregnant women who bleed do not have miscarriages. Most of the miscarriages cannot be prevented as it is the body’s way to of dealing with an unhealthy pregnancy and the signs may include vaginal bleeding with cramping pain felt in the lower abdomen and tissue passing through the vagina.

Bleeding in early pregnancy may also occur due to some other factors as in ectopic pregnancy, chemical and molar pregnancy. Ectopic pregnancy results when implantation takes place outside the uterine cavity, usually in the fallopian tubes. This includes vaginal bleeding, slowly rising S-BHCG levels and sharp pain in the abdominal area.

Chemical pregnancies show painless and scanty bleeding where the S-BHCG level at the first is elevated but thereafter fails to rise appropriately.

Apart from the different type of pregnancies most threatening is miscarriage following failed pregnancy. The bleeding is usually low at first but rapidly increases with the show of fresh blood with clots. This is accompanied by severe abdominal cramps which increases rapidly and the products of conception (POC) starts passing off.

Studies reveal that while most early pregnancy vaginal bleeding is innocuous the underlying problem could not be ignored and it is advisable to see the doctor so that a proper and quick assessment can be expedited.